What Does Fall Mean To You?

Not long ago, a Michigan friend had written to me about her recent doings -- a combination of actively enjoying autumn's beauty with doing chores which must be completed before the onset of winter.  That's what fall is to her: a period of specific activities tailored to the season.

For a kid who grows up in Florida, fall is merely academic: pretty much just a designation on the calendar.  "Fall" means that school is in full swing; "fall" is the time of year when Hallowe'en and Thanksgiving occur; "fall" happens to mean football season (in Florida, we also have spring football).  When I was growing up, most of my friends were also native Floridians; I can't think of more than a tiny minority of kids who'd been born in a place other than Florida.  If they had been, they'd probably moved to Florida before "fall" had made much of an impression.  When we started getting interested in fashion, we noticed that "fall colors" were rust and gold and orange and brown, though we had no idea why.  I remember being a little confused by the old song "Autumn Leaves," and being unsure as to what crayons to use when coloring pictures designated as autumn scenes.  Most of the trees in our town were palm and pine and oak, and we knew only from books that there were trees that changed colors and actually shed their leaves.

The very first time I experienced "fall" was after I'd already graduated from college and started my teaching career.  A friend (another native Floridian) and I took a long weekend in October to visit the North Georgia mountains.  We could hardly get enough of the cool, crisp air and the riot of color which could made even the most mundane highway into a scenic drive.  I took dozens of pictures and reviewed the photos over and over again, reliving the magic of those few days.  We took another trip the next fall, venturing into North Carolina.  Several years later, I would experience my first New England autumn, and it was more beautiful than I could've expected it would be. 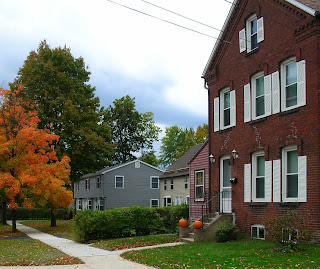 My experience with fall is, however, a week here, a couple of weeks there; I've never been in one place long enough to experience fall's full progression of summer-into-winter.  The photo above depicts what I'd have considered a "classic" fall scene: a tree ablaze with orange coloring, and a front porch decorated with pumpkins.  The scene below took me by surprise: only two doors up from the previous house, a single yellow rose makes its last bid for attention before succumbing to the cold of winter. 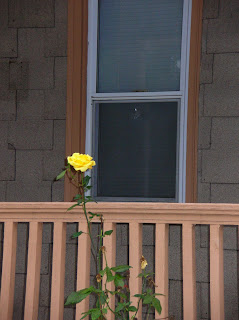 Posted by Marcille Wallis at 2:58 AM No comments:

Posted by Marcille Wallis at 4:59 PM No comments: