Take a Break from Fake

I wonder how many of my friends could be persuaded to observe a moratorium on "fake" -- what I've begun to think of as "the other 'f' word."

Yes, I understand that "the 'f' word" -- the original -- is crude and offensive to many ears. It's a word that should never be uttered around children, and a word that in fact should only be used -- if you feel it necessary to use it at all -- in the company of others who are comfortable with its use. Its overuse has diminished its shock value; used as a noun, a verb, an adverb, an adjective, or an interjection, many of us are now inured to it, and perhaps weary of it. I really don't want to get into a discussion over this "'f' word," however. If I don't already know how you, personally, feel about the word, odds are excellent I am familiar with your position. Seriously. I've heard it ALL before.

I am tired of seeing/hearing others dismissed as "fakes." Fake friends, fake Democrats, fake Republicans, fake fans, fake Christians, "Oh, she's such a fake." I grit my teeth when I see/hear someone loudly proclaiming, "But I am not a fake." What, exactly, is the intended take-away from such a statement? Are the rest of us supposed to retreat to our respective corners for a good hour or so of self-examination, so that we may emerge as enlightened beings who shun fakeitude? News Flash: Just because someone has a different view/belief on their role/responsibilities as a -- friend, Democrat, Republican, fan, Christian, PERSON -- does not mean they're a "fake" anything.

You can keep using the term to describe fake diamonds, fake furs, fake paintings, fake crab; you can fancy it up and use the term "faux" if you wish; none of the aformentioned items is subject to interpretation. Either a stone is a diamond or it is not. Same can be said for fur, paintings, crab, etc. It's OK to talk about a fake identity or a fake ID.

But for anything that's open to interpretation as to how one should properly act ... find another term. Please. Or maybe, just refrain from passing judgment. Restrict critical commentary to the action, rather than attacking the person. That's always an option.

In all things -- even in criticism -- be kind
Posted by Marcille Wallis at 1:07 PM No comments:

How Can I Keep From Singing

Tonight as I took Henry for his last walkie of the night, I took notice of this storm, way off in the distance. We stepped into a clearing, and video-recorded about five minutes of the spectacular light display.

Walking home, I began to think of the hymn, "How Can I Keep From Singing." There's even a line that says, "No storm can shake my inmost calm while to that Rock I'm clinging." It's all about perspective.

Full text of the hymn appears below.


My Life Flows On In Endless Song
Author: Robert Lowry

1 My life flows on in endless song;
above earth’s lamentation,
I catch the sweet, though far-off hymn
that hails a new creation.

Refrain:
No storm can shake my inmost calm
while to that Rock I’m clinging.
Since Christ is Lord of heaven and earth,
how can I keep from singing?

2 Through all the tumult and the strife,
I hear that music ringing.
It finds an echo in my soul.
How can I keep from singing? [Refrain]

3 What though my joys and comforts die?
I know my Savior liveth.
What though the darkness gather round?
Songs in the night he giveth. [Refrain]

4 The peace of Christ makes fresh my heart,
a fountain ever springing!
All things are mine since I am his!
How can I keep from singing? [Refrain]

Henry and I left "our" tiny house and Belfast and headed down the coast toward Bremen to pick up Sue. First stop: a tiny grocery in Northport that's always open by 'way-too-early o'clock, for coffee, a breakfast sandwich, a blueberry muffin, and a jug of water.

As if I needed a reminder, I got a small lesson in small-town behavior. There were no pre-made breakfast sandwiches that I liked in the case; the store manager noticed my look of disappointment, and offered to make me whatever I liked. Naturally, I accepted! While he was making my sandwich, he gave me an opinion on a brand of potato chips that earlier he'd observed me casually studying. OK, I wasn't the only customer in the store, but maybe I was the only out-of-towner and needed watching. Then he offered me a bowl of water for my dog. My dog, Henry, who was sitting in the car. I politely refused this offer, but not because I found it creepy. I already had a bowl of water for Henry, but yes, I found this creepy.

After my purchases had been rung up and paid for, another man, his smiling face somewhat weather-beaten, offered to help me get my purchases out to the car, an offer which was gladly accepted as balancing hot coffee with my other purchases was proving to be impossible. I thanked him, and as I drove away I suddenly no longer found the manager's behavior "creepy." Yeah, when you live in -- or visit -- a small town, people do tend to mind your business ... but that's not necessarily a bad thing. If they've sized you up to be a decent person, you've always got friends. And that is a good thing.

So Henry and I picked Sue up, then we all made our way down the coast -- because Sue was Jonesin' for one last lobster roll before leaving the state. 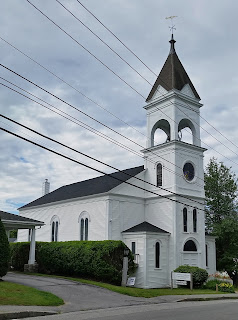 Broad Bay Congregational Church, Waldoboro -- once upon a time, when Maine was still part of Massachusetts, the town was called Broad Bay. 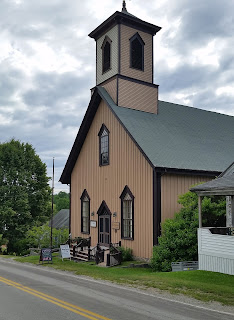 The Little Brown Church, Round Pond -- nowadays, Round Pond is such a tiny little village, yet in the mid-1800s there were three shipyards operating.

Somewhere along the road from Round Pond to Damariscotta -- although I found this scene lovely, even lovelier to me is the fact that the land in the foreground is owned by the Nature Conservancy. 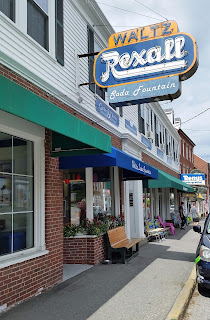 I would have to think long and hard about the last time I saw a Rexall drugstore. Oh, I know they're still around, but I'm pretty sure they're all gone from Florida. We had to go inside, because they advertised a soda fountain ... 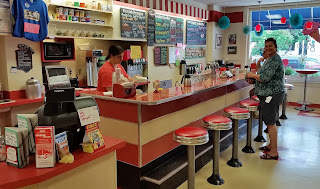 ... and they delivered. Here's Sue, waiting as the "soda jerk" (look it up if you're not familiar with the term; I'm not being rude) makes a couple of root beer floats for us.

We found Sue's lobster roll, and clam chowder for me, at an open-air deck in Wiscasset. Then we started making our way to West Springfield, Massachusetts. First stop in West Springfield, the home of my very dear friends Melissa and John. Then on to Collins Tavern, "West Springfield's Best Kept Secret," where I enjoyed yet another bowl of clam chowder, and some haddock. I've written more about Collins in a post some years ago, so if you want to read more about this place click here.

I'd stayed up until 'way too late last night, visiting with Melissa! But it was a good time, and I enjoyed my all-too-brief time there. There are no photos from today, as we fought road construction and the usual traffic on our way down to Fairmont, WV and the home of Sue's friend Kitt Chapman. We ate chili and drank cherry moonshine, and once again talked well into the night.

Our route started with this unusual sign on the entrance ramp to I-79, which made me laugh:

And then we drove down to take the US 19 shortcut to I-77. This is the overlook that greets travelers from the north, a taste of what's to come along this very scenic highway: 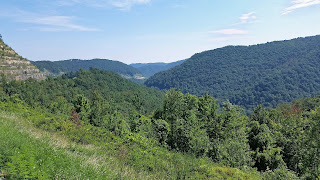 We stopped at the visitor center for the New River Gorge Bridge. This bridge is amazing -- the second largest single span steel arch in the Western Hemisphere, and the highest vehicle-carrying bridge in the United States. Underneath the arch, it's 876 feet high -- that's one Washington Monument and two Statues of Liberty stacked one on top of each other, with about 20 feet clearance. That gorge is so deep that crossing it used to take 40 minutes, winding down to cross what is now the "old bridge" and then winding your way back up again. The new bridge reduces that travel time to less than a minute! 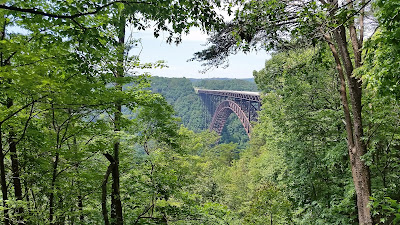 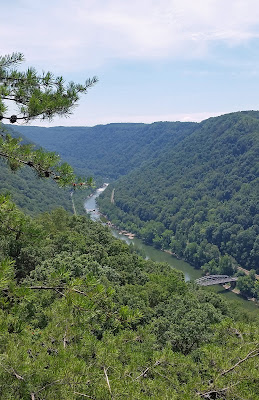 We then decided to drive down into the gorge, to cross the old bridge. It's something I always wanted to do, but as Greg and I were always traveling this stretch of road while pulling our trailer, we couldn't make this drive -- much too steep and windey for a trailer! We'd always said, "Some day ... " 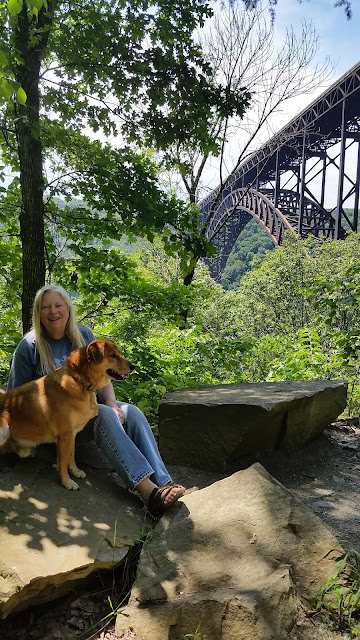 Henry and me posing at a stop along the way down. 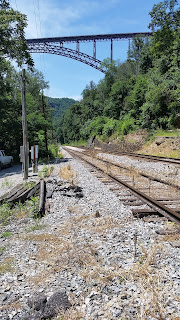 Trains still rumble along these tracks at the bottom of the gorge. 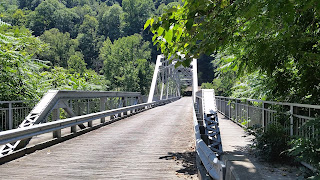 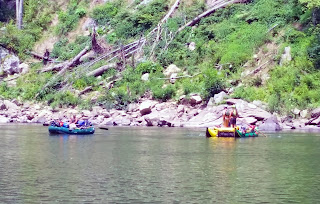 This little beach on the New River is a popular place for swimmers, rafters, and kayakers.

After climbing back out of the gorge, we briefly visited Fayetteville -- "The Coolest Small Town in America" -- for a late lunch, before heading toward Marietta, GA in earnest. We knew we'd be arriving very late, but oh, the side trip into the gorge was so well worth it!

We started the day at a cool, Henry-friendly breakfast place in Woodstock, GA, followed by a visit to the Chattahoochee River, and later dinner at another Henry-friendly restaurant in Marietta. As a last stop, we went to Marietta's famous Kentucky Fried Chicken, for a video of their iconic chicken -- incredibly tacky, but so tacky that it's incredibly cool!

But that wasn't all! We actually drove out into the country, as far from the bright light of Atlanta as we could reasonably get, to try to catch a glimpse of activity in either the Delta Aquariids or Alpha Capricornids meteor showers. I can't really claim to have seen anything from either of these; it seems I was always looking in the wrong direction when Sue managed to see something. Or maybe I'm just too nearsighted. However, both of us saw a spectacular meteorite entering the Earth's atmosphere.

And then back to Marietta, and to bed, to get up early the next morning for the trip back to Florida.

I'm so glad that Sue persuaded me to go on this trip! In some ways, it was bittersweet, as we traveled along many of the same roads that Greg and I had traveled in our long tours as Celtic Heritage. In a couple of ways, I fulfilled promises that Greg and I had made to each other. And I did something altogether new, in Henry's and my visit to Acadia National Park ... and perhaps found some inspiration as to returning to Maine next summer, perhaps as a performer again!

Posted by Marcille Wallis at 1:37 PM No comments: