Maggie Muggins on the AT 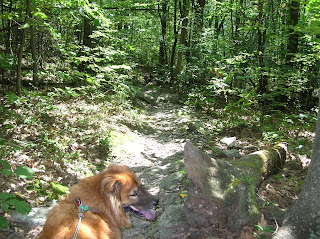 But today was Girls' Day Out for Maggie and me, and we chose to spend it on the Appalachian Trail.  We entered the Skyline Drive via Thornton Gap, drove south to park at Beahms Gap, and walked a few paces back to the Appalachian Trail (A.T.).  (I realize that few who read this will recognize -- or even care much to know -- the place names, but I just like the sounds of those names!)

First order of business -- whether to head north or south.  We chose north, because it promised to take us to a spring that would become the headwaters of Pass Run, which flows near our campground.  After examining this completely unremarkable body of water for mere seconds, we turned back to the trail and continued north.  We could hear cars as they cruised along Skyline Drive, but after a while, the sound of cars became more and more faint, until we didn't hear them at all.

This is the point at which I became a little spooked.  Though I enjoy backwoods stuff, I don't frequently get to do much of it; I'm not used to it at all.  The A.T.'s "through-hikers" would be hundreds of miles ahead of us by this time of year, and it occurred to me that on a day that was just a little too hot for hiking, we may be all alone on this stretch of trail.

And then I realized:  "Hey, I have protection: I have a chow-chow!"  The chow-chow (Maggie, of course) didn't seem anxious or afraid.  So why should I be?  Actually, now that I reflect back on it, if I'd had a human companion, we'd probably have been talking for much of the way and I would've missed some pretty cool sounds -- like the sound of a hawk's wings beating as it flew overhead.  Man!  I'd be willing to bet that, pound for pound, the hawk moves as much -- or more! -- air as a helicopter!

A lot of the next section of trail was pretty narrow and rocky.  Not steep, but not easy, either.  I had to really watch my footing.  My almost-11-year-old dog, however, nimbly skipped along.  Thanks to an old knee injury, inclines are much easier for me than declines, and I was grateful that the first portion of our hike was mostly uphill -- I was figuring that Maggie would be tired on the return portion, so there'd be less chance of her yanking the leash and making me stumble going downhill.

I'm not sure how far we hiked; it really couldn't have been all that far, but both of us were getting a bit overheated.  So at some point, I stopped and we enjoyed some cool bottled water and a short rest.  I was able, faintly, to hear cars once again, but the sound was coming from well below us.  During our rest, a young couple also heading north came up and briefly spoke to us, the young man even offering water for Maggie.  Then they took a little spur off the trail toward one of the shelters, while we headed back south.  We passed another north-bound couple; the young man offered his hand to Maggie, but she was only briefly interested, as she apparently thought that there was more urgent business down the trail.

Remember how Maggie was going to be so tired on the return portion?  Nah!  At certain times she was going so fast that she made me look as if I were staggering drunk, trying to keep up with her.  But she was very cooperative; when I'd had enough and said, sharply, "Slow down!" she did -- thank goodness!  Remember when I was spooked?  It happened again, in the same section of trail.  I guess maybe there really was something -- big -- just out of sight.  They say that you should be a little noisy when you're hiking in the backcountry, so that bears, who are normally very shy, can hear you coming and avoid you.  Well, if that something "big" was a bear, that bear would have had no trouble hearing us as we approached, me clumping over rocks in my hiking boots, trying to keep up with the dog.  And the loud panting!  ... and Maggie was panting a little bit, too.

We can't wait to do it all again! 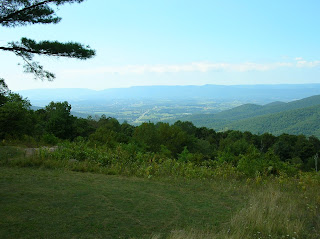 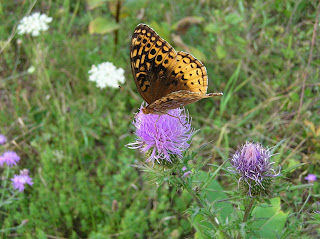 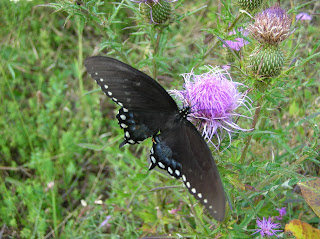 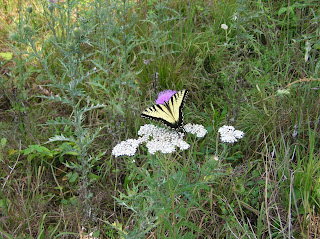 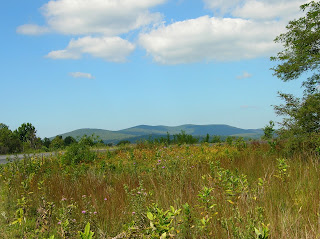 Postscript:  Just when you think, gosh what an exhilarating day!  It doesn't get any better than this!  ... and then it does.  The sky is cloudless tonight, and, far from bright city lights, we can perfectly see the innumerable stars of the summer sky -- we can even see the Milky Way!  It really doesn't get any better than this ... God is good ...
Posted by Marcille Wallis at 2:48 AM No comments: