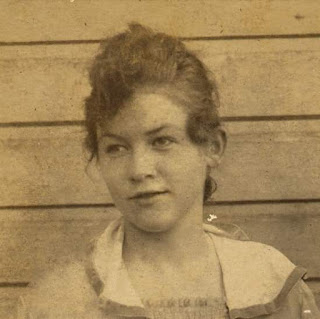 My grandmother, Marie Bloise Cowan, on her wedding day in 1917. Twelve years and four children later, she and my grandfather, Jack Funderburk, would be plunged along with the rest of the world into the Great Depression.

I'm thinking about her in particular today, as I hear people voice concerns over COVID-19. By the time the Depression came around, "Mimi" had already been witness to widespread and deadly outbreaks of influenza, scarlet fever, tuberculosis and yellow fever, and a War to End All Wars. I find myself imagining how she would approach today's situation, and find inspiration in her.

Particularly inspiring to me is that, during the Depression, she and my grandfather were approached by a man who just could not afford to keep his young son. The man knew his boy was bright, and needed an education, but he simply could not justify a household member who couldn't work to help provide for the household. Would they be able to take the boy in?

I wonder if they readily said yes ... or did they fret over the decision, saying, we already have four children and this man's asking us to take on a fifth?

My grandparents were generous people of deep faith, so I'm reasonably certain they unhesitatingly said Yes. Yes to the boy who brought his sole possession, a guitar, with him. I mention the guitar because among a lifetime of achievements, that boy was one of the founders of the Florida Folk Festival -- which is our nation's oldest state-run folk festival, 68 years strong. The boy -- the man -- remained devoted to my grandparents all their lives.

Our current crisis has not yet reached those epic proportions, and perhaps it never will. (Let us hope!) But in the meantime, there are a lot of scared people out there who may need help. I'm looking to Mimi's example. I may not have much, and helping may require sacrifice on my part ... but ... this one's for Mimi.

Posted by Marcille Wallis at 3:12 AM No comments: