So many of my friends, and friends of Celtic Heritage, know of Jerry Lane through words in the header of the monthly email newsletter, referring to him as "caretaker extraordinaire." Those who were close to us knew him as "Uncle Jerry."

It is with great sadness that I announce the passing of "Uncle" Jerry Lane.

Jerry was born in Michigan City, Indiana on January 30, 1936. He was a lifelong fan of the Fighting Irish of Notre Dame, though whether it's because he was born into a proud Irish-American family or because he grew up fairly close to South Bend, I cannot say. He loved Irish music, and he could definitely carry a tune ... but the only times I ever really heard him sing, he was clowning around, bombastically interpreting "Danny Boy" or the "Mountains of Mourne" or some other song beloved by the Chicago Irish.

Greg and I first met Jerry when we'd go down to a local hangout to play trivia. His "handle" was "Moose" and for a long time we didn't know him by any other name. He was a good player, and seemed to know a lot about a weird variety of things -- well, of course; isn't that what you need, to be a good trivia player? After a while, we began to sit with him, and to converse between games. We learned that he was a salesman at a local used car lot, that he was single, and that he loved animals.

We were just starting to be away from home a lot, traveling to art/craft fairs and so forth, and Greg and I often remarked how wonderful it would be to have someone like Jerry, an independent and responsible individual, living with us, to look after things while we were away. One day, we offhandedly mentioned that to Jerry.

Some weeks, or perhaps months, later, we got a phone call from Jerry, asking us to meet him at his place of business. He was very secretive as to the purpose of the meeting, revealing only that it was a personal matter that he wished to discuss. When Greg and I got to his office, he wasted very little time in getting down to business: Remember the time we talked about him living with us? How serious were we about that? Did we want to explore that further?

Our only hesitation was Maggie, our chow mix, who only liked about six people in the entire world. How would Maggie react to sharing her space and her people with someone else? We invited Jerry to the house, to see how he and Maggie would get along. I don't remember exactly what happened, but I do remember there was blood.

Jerry reacted with great compassion and understanding for a dog who was still carrying a lot of emotional baggage from her earliest days, and by the end of the visit, she actually let him pet her. But when he left the house, Greg and I looked at each other, shook our heads, and said, "Oh, well, so much for that!"

Eleven years later, Maggie would cross the Rainbow Bridge with Jerry Lane having pretty much gained the title of "Most Favorite Human." Almost two years after that, Jerry Lane would pass on, still bearing a scar from that fateful first meeting. Such is love.

Jerry did come to live with us, and we grew to be a family. He loved to cook, and what joy it was, after days of road food, to come home to a nice pot roast or meatloaf, good ol' comfort food! When it was your birthday, you got to choose your special dish ... mine was Venetian Shrimp and Scallops. When Greg first became ill and was hospitalized, Jerry made me come home from my bedside vigil for some fish 'n chips. He was constantly trying recipes from Rachael Ray or Paula Deen, and was not-so-secretly in love with Giada de Laurentiis.

He supervised the cooking for a number of our band parties, and even provided the hospitality for the first WNC Highlands Celtic Festival. The summer vegetable chili -- with bulgur wheat substituting for meat! -- that he prepared for that event was so yummy, many of the Highland athletes actually chose it over the pulled pork that also was offered. Matt Miller was so fond of Jerry's baked ziti, he wrote a dedication to it in the liner notes of the "Marcille Wallis & Friends Live!" CD.

Jerry loved nature, and enjoyed sitting out on our lanai, watching the activities of the birds and squirrels that visited our backyard. So sensitive had he become to the sounds of our local wildlife, that through him I was able to predict the strike of Hurricane Charley in the summer of 2004. Greg and I were up in Ohio/Pennsylvania at the time, and Jerry had been providing us with updates on the compact but powerful storm out in the Gulf. The morning of August 13, Jerry called to tell me that the storm would strike the Tampa Bay area later that day, so our home would be in the clear. "But you know, it's the darndest thing," he said, "None of my birds were out in the backyard this morning. It's dead silent here." And I knew right then, what the meteorologists did not: That the storm was headed for Charlotte Harbor, well south of Tampa Bay. It took some persuasion to get Jerry to leave the house and go to a friend's home, but he later thanked me for it. "Honey, I did time in the Air Force overseas, and thought I'd seen and heard it all, but I'll tell you, that hour or so as Charley passed over us was the most terrifying event of my entire life!"

Uncle Jerry had comforted me in the passing of my father in 2003 and the passing of my mother in 2006. Though I had other adult relatives still living in other states, Jerry was as close to a parental figure as I had, so when Greg and I married, Jerry's the one who escorted me down the aisle. 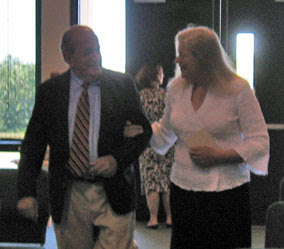 Jerry, when speaking directly to Greg, often called him "My Son." He took it pretty hard when Greg passed, as any parent would, since it feels like things aren't working in the natural order. He'd already suffered the emotional blow of us selling our house in 2014, in order to be closer to Tampa General Hospital for the sake of Greg's health. So when he threw himself more deeply into the activities of the Moose Lodge he'd joined, it was only a good thing. In the earlier part of this year, he was elected president of his lodge. What a wonderful achievement for a man who, only a few short years earlier, had lamented being unable to find a job that suited him -- yes, Jerry was that kind of guy. While others look forward to retirement, Jerry despised the very thought of it.

Although Jerry's death was sudden, and a sudden blow, I am comforted by the fact that he went out on his own terms. He'd always feared a lingering illness, and he was spared that. He'd hated having nothing to fill his days; well, he didn't just have a job that one person had hired him for, he had a position that hundreds of people had elected him to.

Goodbye Uncle Jerry. Thank you for all the years you lived with us and loved us and took care of us. Your Irish Eyes Are Smiling. "Caretaker Extraordinaire," Rest In Peace.
Posted by Marcille Wallis at 12:26 PM 1 comment: 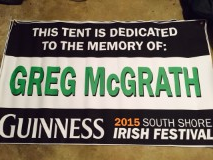 My heart is full of gratitude this morning, as I've just learned that Greg will be memorialized at the South Shore Irish Festival, September 12-13, in Marshfield, MA.

A while back, South Shore Irish announced that nominations were open for dedication of six tents to honor/remember individuals who had "a love for Irish Culture, Music, and just [an] all around mindset of what it means to be Irish." Friends, especially those who are members of the New World Celts, rallied behind Greg's nomination with emails, letters and Facebook posts.

Although Greg is best-known for his concert and festival production in Florida and North Carolina, he actively promoted the efforts of Shamrock Nation, a Massachusetts-based organization which was founded for the purpose of fostering Irish music and culture.

The complete list of this year's honorees is as follows:


Posted by Marcille Wallis at 7:46 AM No comments: