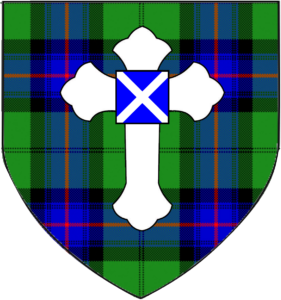 Yesterday I attended a Kirkin' O' the Tartans (church service) in Montreat, NC (near Swannanoa, where we're staying). What an elegant and rousing tribute to family and Scots heritage!

Being the day before Memorial Day, there was a salute to our service men and women that began with the congregation leader asking all active military personnel to stand. He then asked all veterans to stand and join them ... then asked all spouses, parents, or children of deceased veterans to stand. At this point, standing, I sort of lost it. I often miss my father most keenly when I'm in his "home territory" of Western North Carolina and this, combined with the pomp and ceremony of the whole service, put me a little over the top, emotionally.

I'm really happy to be part of a heritage that honors family and commitment.

Posted by Marcille Wallis at 7:35 AM No comments: 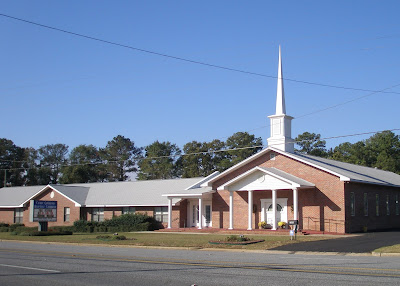 On Sunday, May 9 (Mother's Day), we set out for Ozark, Alabama, to Camp Ground Baptist Church, which is pastored by my long-time friend Al Sonanstine.  Al was Minister Of Music at First Baptist Church, Arcadia, Florida, during the time I served there as organist.  It was so wonderful to see Al, his wife Peggy, and their children Jason and Adrienne -- and Jason and Adrienne's respective fiances.  (It's been a while since I saw them!)

Matt Miller (fiddler) and I were to play a concert during the evening worship service.  The service was kicked off by Camp Ground's praise band, led by Jason, and I was mightily impressed with the power and musicality of this mostly self-taught group of musicians!  They were a tough "act" to follow!

Our concert had been billed as "A lively evening of instrumental Celtic and Bluegrass, Storytelling, and favorite old-time Hymns."  The audience was part Camp Ground Baptist congregation and part guests from other community churches -- and all some of the most supportive and welcoming people you could ever hope to meet.

I can't really say exactly what was my favorite part of the evening.  I loved playing the Celtic tunes with Matt, since the last time we played that material together was back in December, in our "Christmas With The Celts" concerts.  It's been even longer since I accompanied Matt (on guitar) on his "Teetotaler" medley or the "Orange Blossom Special," so this part was a lot of fun for me.  But we very, very rarely, play the old hymns together -- stuff like "Will There Be Any Stars In My Crown?" or "I'd Rather Have Jesus" -- and it's even more rare that we play to an audience who knows every single word and sings with such enthusiasm.  So perhaps I've just figured out my favorite part of the evening!

It was a treat and a blessing to be part of the Camp Ground Baptist family, if only for a few hours!  "Thanks" somehow seems inadequate to express my gratitude for the opportunity, but ...

Posted by Marcille Wallis at 3:21 PM No comments: