The Day Charley Came to Visit 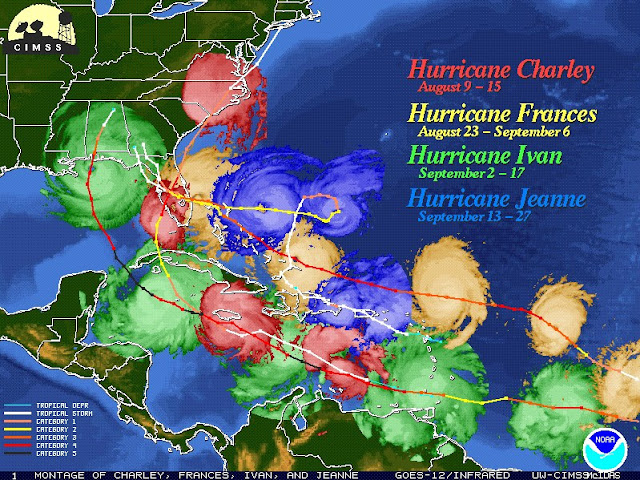 Ten years ago today. Woo! Do I remember this!

Greg and I were up in Northern Ohio as we tracked the progress of Hurricane Charley. Friends at home (Charlotte Harbor) had told us there was little to worry about, as the weathermen were predicting the storm would make landfall on Tampa Bay. Other weather gurus were forecasting Fort Myers as Charley's target. "There's a whole lotta real estate in between Tampa and Fort Myers," I fumed. "And guess who's right smack in the middle? I can't believe no one's figured this out!"

The morning of August 13, I touched base with "Uncle Jerry," the man who lived with Greg and me and took care of our house during our long road trips. "Nothin' to worry about, Honey;" he said, "the weathermen are still saying it's headed north of us and they've started evacuations in Tampa. Everybody's headed inland." Thinking to change the subject, he told me about that morning's breakfast, which he always took on the lanai. "It's the darndest thing. None of 'my' birds came into the yard and sang to me this morning. Wonder where they went?"

A cold fear gripped my heart. Because I knew where those birds had gone. They'd evacuated. Charley was headed for Charlotte Harbor.

(If you don't understand what I knew, let me briefly explain: Animals are much more sensitive to changes in barometric pressure than humans are (or perhaps allow themselves to be?). Native Floridians -- and by this, I mean the tribes of Native Americans who originally inhabited the state -- learned to forecast the weather by observing nature. To be honest, I trust their old methods more than I trust modern Doppler radar! I still recall a "legend" passed down to me about a family member who'd learned how to observe atmospheric changes and animal behavior from his Native American neighbors living on Sanibel Island. Their wisdom saved his life from one of those devastating storms that ravaged Florida in the early part of the twentieth century.)

I finally managed to persuade Jerry to leave our house, as it was too late to try to evacuate to a safer locale. But I figured misery loves company, and so I convinced him to go ride the storm out with our friend Vicki, who had storm panels on her windows. At least Jerry would not be home alone!

Greg and I had no TV in our campground (actually located in Western Pennsylvania's Old Order Amish Country). We headed out to a local sports bar near the interstate to see if they'd let us watch the Weather Channel on one of their TVs. And we sat right there, to watch Charley barrel into Charlotte Harbor. The birds knew. Thanks to the birds, I knew.

Jerry told me that it was the most frightening time of his entire life -- and he'd done service in the Air Force during the Korean War era!

Greg and I finished the show then made a beeline back home -- one of us would drive while the other one slept -- to find a mess. But compared to others, our house was relatively unscathed, even with the big gaping holes in living room and bedroom #2 ceilings. "Frances" created even more of a mess, since contractors hadn't been able to patch us up yet, beyond some tarps on the roof.

Funny story from Frances -- we'd hired three college students visiting from Estonia to do some tree removal/yard cleanup. They'd had experience in the forestry service back home, and absolutely insisted on continuing their work through Frances's Category 1 rain, saying, "This is a plain day back home in Estonia. No worries." Wow.

Then there was the time we were headed up to Massachusetts, heard about "Ivan" bearing down on us, rented a storage unit in Columbia, SC so that we could empty the van, then headed back down to Florida to salvage CDs and sound equipment ... because if another major hurricane had hit the house in its unrepaired state, it would've just taken the whole thing down. You find out what's really important to you when you've only got the space in a cargo van to save stuff!

Ivan missed us, though, spreading his brand of joy amongst our friends up in the Panhandle. Ugh. By the time "Jeanne" came around, roofing contractors had been hard at work ... and Jeanne spread our shingles all over the neighborhood.

A wearying summer for sure. Hope there's never another one like it!

Posted by Marcille Wallis at 6:45 PM No comments: