Christmas With The Celts 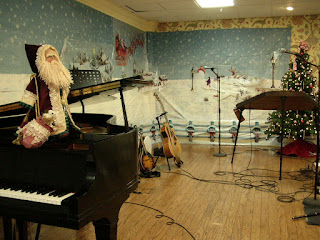 Pictured above is the setting for one of our Christmas With The Celts concerts.  The series was abbreviated, due to Matt (our fiddler)'s college schedule.  But it was power-packed, nonetheless, and full of memorable moments!  We just finished the series yesterday -- here's a synopsis:

Matt, Robin (the piper) and I kicked off the season by playing for the Punta Gorda Kiwanis luncheon last Thursday.  What fun -- the Kiwanians love to sing, and what a terrific meal they served!  We then headed over to Arcadia and met up with Don (vocalist), Ann and Cal (dancers) for a performance at First Presbyterian Church.  This one's special to me, as I'm performing for my home town; and despite a couple of "flies in the ointment" -- I forgot to bring Santa (the official mascot of Christmas With The Celts) and we had to make a change in one of the dance numbers because the piano was locked! -- it was an energetic and fun evening.  Matt made his first-ever guitar performance, accompanying Don (on flute) and me (on dulcimer) in a medley of I Saw Three Ships and the Sussex Carol.  Ann and Cal also debuted a new strathspey that they'd choreographed; it was flowing and very beautiful.  Robin cracked us all up with a silly bit of schtick in his rendering of O Come All Ye Faithful, as he told one section of the audience that they had to sing along -- in Latin.  "Yeah, right!" they seemed to say, though I heard a few voices gamely playing along.

The next night we returned to the Congregational United Church of Christ, Punta Gorda, the birthplace of Christmas With The Celts.  The church was absolutely packed to capacity; we knew, from the number of ticket orders we'd taken over the phone, that response was very strong, but I was still surprised to learn that every available chair was taken -- the only chair left was Pastor Bill Klossner's chair from his study, and I'm pretty sure that if one more person had shown up needing a seat, they'd have been given that chair!

Elly Gilmore made a cameo appearance at this performance, delighting the audience with her set-ups of the Wassail Song and Auld Lang Syne, and singing of Auld Lang Syne.

We were able to perform our dance number using the piano, as rehearsed: an Irish reel played "Cape Breton" style.  As to Santa ... well ... I did manage to remember to bring him, and set him up in his usual place on stage, but he suffered a minor accident: as Ann was making a sweeping dance move, her dress caught Santa and flung him to the dance floor.  Ann and Cal tried to avoid Santa while continuing their dance, but alas, they weren't quite successful; poor Santa was kicked and subsequently trampled.  At one point Cal bent down to retrieve Santa and set him into place again, but realizing that he'd bent over with his back to the audience -- while wearing a kilt -- Cal hastily stood up before properly securing Santa; Santa toppled again, to be kicked and trampled again.  Matt finally stopped fiddling and picked Santa up, taking time to place him so that he'd fall no more.  Don and I kept the music playing the whole time.  I'd like for you to think that I was applying the "show must go on" philosophy, but the truth is, I was too helpless with a mixture of horror and laughter to be of much service to the unfortunate Santa.  He stood looking rather disheveled and forlorn the rest of the evening.

Robin's charge to the audience to sing in Latin was put right back at him, as a significant number of this evening's crowd actually knew, correctly pronounced, and loudly sang the entire verse in that ancient language!  Another funny incident occurred during the set-up of the Ballad Of St. Anne's Reel (a song about a magical evening on Prince Edward Island (PEI)), when Don asked, as is his habit, if anyone in the audience was from PEI.  This night, a couple actually raised their hands and Don was rather taken aback, completely psyching himself out, as he wondered if the couple knew the song or ... actually, I'm not sure what was going through his mind, but I am pretty sure that the words to the song weren't going through his mind, because he fumbled around for a few short but agonizing seconds, then regained his composure and appealed for a "do-over."  It was one of the most professional and graceful responses to an obvious "flub" that I've ever seen -- and far more graceful than my own goof later in the evening, when I completely forgot how to play the Swallowtail Jig.  Matt, grinning fiendishly all the while, "pulled my fat out of the fire" on that one, keeping the tune going while I desperately tried to pull the correct notes out of the chord progression that, miraculously, I somehow correctly played.  Greg did his part from the sound board, "fading" the amplification of the dulcimer to near zero.  But I know for a fact that a few people left the concert that night, scratching their heads over the strangest rendition of an Irish jig they'd ever heard!

Following a refreshing Saturday off, during which time Santa received plenty of TLC, we headed to Orlando on Sunday, for a pair of performances at Westminster Towers (WT).  WT is a graduated-care facility for seniors, with accommodations ranging from apartment-style living for those able to live independently, to complete nursing care.  We played for the "Health Care Center" residents first.  Here, Robin was at his absolute finest and most charming, as he passed out a variety of hand percussion instruments to members of the audience, encouraging them to keep time to the music, make lots of noise and have lots of fun, and they certainly did.  We then went down to the main floor to play for the "Independent Living" residents.  It's that venue that you see pictured, above.  (You also see Santa perched atop the piano, looking his old self again and safely out of harm's way.)  The stage was set for an old-fashioned, Dickens sort of Christmas, a perfect and cozy setting for our show.  I think we're always at our most relaxed at WT -- this gig usually occurs near the end of the run, so everyone's really in a groove; plus, the venue's smaller and more intimate, so there's less probability of crowd-size-induced jitters.  The audience couldn't be any more receptive or appreciative, and it seems that our entire cast lingers just a few extra minutes after each WT performance, to visit and swap stories with the residents.

The final night of our Christmas With The Celts run was in the Church On The Square, in The Villages.  For the past few years, this has been an SRO crowd, but I do believe that I saw more people standing than ever before -- the church "officially" holds about 800 people, more or less, but an "unofficial" count reported to me a few minutes prior to the concert had the tally at 850, and I did notice even more people coming in after we were already under way.  Quite a setting in which to introduce the newest member of "Marcille Wallis & Friends," Dallas Albritton.  Dallas will play fiddle during our St. Paddy's run, so we thought it would be a good idea to initiate him, and introduce him to The Villages, via a "fiddle duel" with Matt.  In Robin's words, "That fiddle duel was epic!" as Matt opened with a lively bluegrass tune, to be answered by Dallas on a contemporary Celtic reel.  Matt came back with an inspired, and inspiring, interpretation of Bill Monroe's Big Mon; Dallas responded with a blistering version of Paddy On The Landfill.  They then traded back and forth on parts of the Red Haired Boy, before joining together to make that Boy's hair a little Redder -- and more electrifying -- than ever before.  The audience responded with thunderous applause and a standing ovation.

Matt received two other "standing O's" that evening: one for his Teetotaler medley; the other, for his wicked improvisation on the Orange Blossom Special -- which even included the opening measures of Freebird!  On that last night, Matt's fiddling was just a touch more masterful ... Don's singing, particularly on Wild Mountain Thyme, just a touch more beautiful ... Robin's piping just a touch more majestic ... Ann & Cal's dancing just a touch more elegant ... what a way to end the season!
Posted by Marcille Wallis at 8:00 PM