The past 10 days in Ohio have been for the most part unseasonably warm, and the leaves slow to change to their autumn hues.  But in the last three or four days we've been treated to a riot of color as the trees have finally begun to break into their rich golds and yellows; deep, almost purplish, reds; and my favorite of all, a shimmering color that's too soft to be red, yet too vibrant to be orange; I've decided it's God's Own Red, and it takes my breath away every time I see it.

Our Ohio place of residence was the Lock 30 Woodlands RV Resort, "officially" located in Lisbon but actually closer to tiny Elkton.  It may be the nicest campground we've ever stayed in, with all of the campsites forming a single-file ring around a huge partially wooded infield.  I'm a little too spoiled to declare it perfect, as we had only intermittent cell phone service and no cable TV, but there was WiFi, a spotless laundry, a game room with pool, foosball and arcade games, and a library.

And there was Blackjack.  When we first arrived, I was a little suspicious of the large black dog that wandered around the grounds.  Since campgrounds are usually very strict about dogs being on leash, I assumed that he must be a stray, or a wayward resident of some nearby farm.  But after observing him a couple of days, I noticed that he made rounds, visiting select campsites, hanging out for a brief period, then moving on.  One day as I left the laundry, he loped over towards me and began to follow me back towards our site.  Knowing that he might not be welcomed by our own pooch, Maggie Muggins, I turned to him and firmly said, "No.  You stay."  To  my amazement, he obeyed.

A few hours later, Greg and I were sitting outside with Maggie when the black dog, quietly and with bowed head, began pacing back and forth at the entrance to our site.  It was as if he were asking permission to visit.  What a polite dog (if a dog can be polite)!  We called to him; slowly and cautiously, he approached us.  But Maggie would have none of it!  She strained at the end of her chain, barking and growling, defending her little territory against this intruder.  So the black dog made a dignified retreat (if a dog can be dignified), as if to say, "I do not go where I am not wanted.  There are plenty of others who welcome me and I don't need to waste my time."

I was sorry for the snippy behavior of my pet, so I followed the dog until we were out of Maggie's sight, then called to him.  He immediately lay down and rolled over which, if you are a dog lover, you know is the dog's way of signifying that he's not a threat and doesn't consider you to be one either.  I petted the huge head and rubbed the belly and as he turned to face me, saw that he had only one eye.  "Poor old fellow," I thought, "what's your story?"  His collar said that he was Blackjack, and listed an address that looked familiar; perhaps the address of the campground itself.  Greg came over then, and the two of them had a brief visit, before Blackjack made off for the rest of his rounds.

Next day I was at the laundry when one of the workers drove up in a golf cart, and who should be her passenger, but Blackjack.  So I asked her about him, and was told that he was "sort of the campground dog."  As to the eye and the slight limp, I was told that in his younger days, Blackjack was an inveterate chaser of cars, who liked to pretend to bite at the tires.  But one winter day, the truck that he was chasing slid on a patch of ice, and Blackjack was hit.  Badly injured, he ran off into the woods -- to die, they thought, and though they searched and called, he was not to be found.  But two days later, Blackjack came back.  It took a while for him to mend from his injuries, and his blinded eye had to be removed, but he did recover, and his tire-biting days are long past.  Nowadays, Blackjack trots alongside certain vehicles, occasionally barking, noisily, happily, but always at a safe distance. 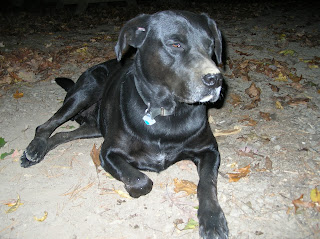 I suppose Blackjack's story is much like the story many of us could tell.  We engage ourselves in foolish pursuits, the possible negative consequences of which are so obvious to practically everyone but ourselves.  Sometimes we encounter suffering and pain -- and not necessarily of the physical kind.  The wisest among us learn from the experience.  But the wisdom is in two parts: one part is the specific lesson learned; one part is in the approach to the lesson.  Dogs have the right approach -- they may appear to possess human virtues such as politeness and dignity, but they are incapable of the bitterness and self-recrimination that we humans wallow in after a setback.  And they certainly are incapable of destructive wishful thinking -- you know, the one where you think over the bad situation and analyze it to determine the specific error that led to your injury, and then you spend lots of time wishing that you could continue your behavior unchanged except for that one outcome.  If Blackjack were human, he may have decided that the blame lay with the icy road conditions, rather than chasing cars!

But dogs aren't human -- thank goodness! -- they're dogs, and they live in the here and now, rather than in the what if and if only.  I've long suspected that God gave us dogs as examples of unconditional love, faith, loyalty, trust, living in the present and so much more; yet I know that God's lessons come through whatever "teacher" we are most in tune with.

I'd like to say that Maggie and Blackjack eventually became best buddies, but that's not what happened.  Oh, there was the time that Greg ducked inside the trailer to fill Maggie's water dish, and returned outside  to find that she'd somehow slipped her lead and was heading full-tilt toward -- you guessed it -- Blackjack.  We held our breaths as we watched the two dogs circle each other, sniffing at pawing at each other.  When we called to Maggie, Blackjack turned toward us with a grin (if a dog can grin) and then galloped right over to where we were standing, Maggie frisking right behind him.  When it was Frosty Paw (a frozen treat for dogs) time that night, we gave Maggie her treat, and Blackjack one too (he happily ate both the ice cream and the paper cup!).  After they'd had their little frolic that afternoon, and later had eaten their treats in companionable silence, Greg and I figured that Maggie had finally warmed to Blackjack.  But it was not to be.  She continued to snarl and snap whenever he offered to come on our site ... and he continued with his philosophical acceptance of her behavior.

Good-bye, ol' Blackjack, 'til next year!  You taught me a lot in a short period of time.  Good Boy!
Posted by Marcille Wallis at 1:56 AM