I've recently come home from a meandering trip to Maine and back -- the first "real" vacation I've had in several years.

It was not something I'd planned to do this summer! Other than attending WNC Highlands Celtic Festival in June and a family event, also in North Carolina, in August, I had only the most vague of plans: perhaps a September visit to Western Massachusetts to visit friends living or summering in that region, perhaps one more visit to North Carolina for "Celtober." But when my friend Sue asked me to accompany her on a drive to Maine, she was very persuasive. She'd won a scholarship to the Audubon Society retreat off the coast of Bremen, Maine, and having found travel arrangements to and from the island to be a logistical nightmare, decided to drive back and forth -- would I go? The promise of a fun road trip with Sue, plus a few extra days in Maine to myself during her camp, sounded just like what I needed, so after only the briefest hesitation I said yes.

I hope Sue did not find me too bossy in planning the trip! But the truth of the matter is that, after years of traveling up and back to New England -- including Maine -- I figured I knew the most reliable route to take. We had invitations from a few friends for stops along the way, figured on a couple of brutal driving days, and left the rest up to inspiration and imagination. So on Tuesday, July 14, Henry and I set out for Marietta, GA, to pick up Sue and begin our road trip. 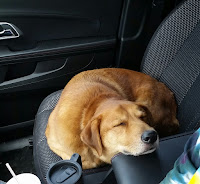 Got a late-ish start from Marietta, because Sue just got a brand new job! So we spent a bit of time packing up her classroom before setting out on the road. Traveled a few hours to Johnson City, TN, to the home of my friend Brad Leath. He had a pot of curried lentils and a loaf of fresh-baked Irish soda bread waiting for us. And plenty of good conversation, both during dinner and after. Brad and his family live in a lovely historic neighborhood of Johnson City. Here's a photo of Henry and me posing with Brad on the front door step: 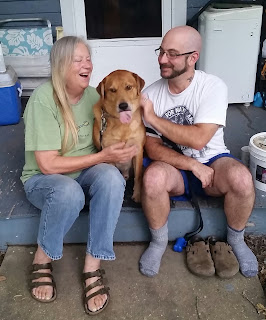 Funny as it is to see Henry sticking his tongue out, the photo that makes me laugh is this one, of Henry giving Brad the stink-eye: 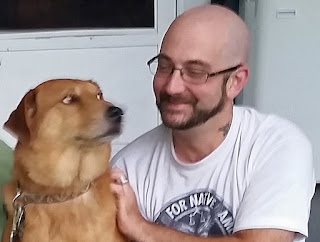 We bid farewell to Brad and Johnson City, and set out for the longest driving day, up through the Shenandoah Valley. A couple of times, backed-up traffic "forced" us onto the scenic Lee Highway, which weaves back and forth along I-81. The Shenandoah Valley is very scenic and a beautiful, even peaceful, drive, despite the fact that it's a major corridor for the trucking industry. This is a typical scene: 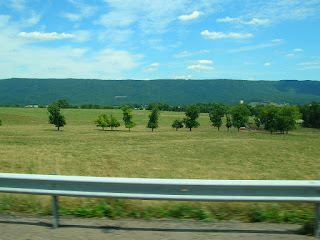 But we didn't pause for photo ops, because ... well, how can you choose? Each new vista is more beautiful than the one before! Plus, we had a goal: meeting my friends Gwyn and Patrick for dinner in Harrisburg, PA at McGrath's Pub: 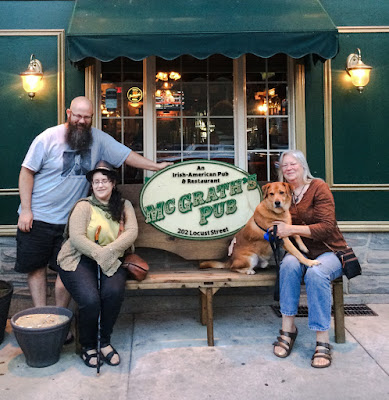 McGrath being Greg's last name made this a very special evening for me; what a "find" by Patrick! I had looked forward to this as much as any single aspect of our trip. We had a lovely visit and a lovely meal -- Henry even got to sit with us in the pub! -- before heading back out into the night. A brief detour before getting back on the Interstate, to watch the fireflies winking out in the fields, then we sped on up I-81 to I-84 and Milford, PA, where we'd spend the night.

Last leg of our journey to Maine began with breakfast at Renee's Hot Stuff Deli in Montgomery, NY, included a side-trip to East Longmeadow, MA, so that Sue could locate her parents' former home there, and a visit to the Dr. Seuss Sculpture Garden in Springfield, MA: 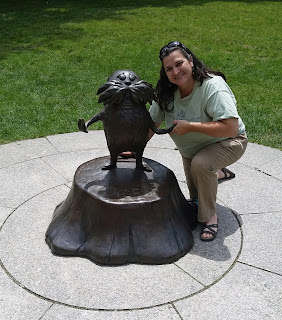 Then another side trip into Merrimac, MA, for a brief visit with Sue's and my former student Laura Jordan. Laura recently had a baby, and it was so exciting to meet him! And to see Laura, after too many years. I've managed to keep up with her and her musical career, but I do hope it's not another 17 years before I see her again!

Finally arriving in Maine, we met up with Sue's friend Sherry, for dinner at Falmouth's Dockside Grill -- great views of Casco Bay and twin lobsters! A late night pilgrimage to LL Bean's flagship store in Freeport, then finally, in the wee hours, we arrived in Belfast. 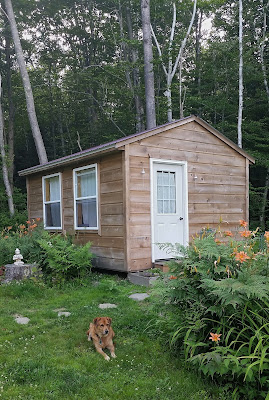 Above is a picture of the "tiny house" where Henry and I would stay during the week that Sue was at camp.

The day started with a hearty breakfast at Northport's Hideaway Diner, then the Maine Celtic Celebration. This was a somewhat bittersweet time for me, as Greg and I used to participate in the Celebration, prior to his becoming too ill to comfortably travel. We listened to some great music 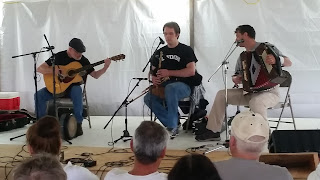 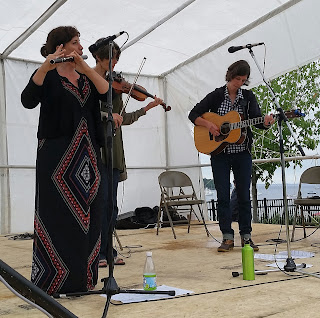 and saw some amusing things 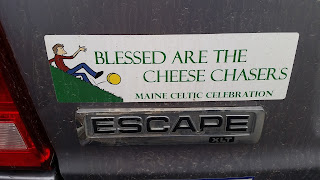 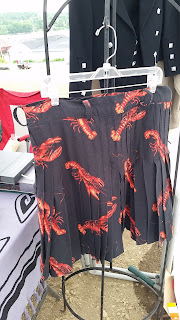 before wandering back to the tiny house, picking up the car, and going to Maine Maritime Products for a boiled lobster and some steamers to share. (When you're in Maine and lobster is only $7.99 a pound, you should take FULL advantage of it!) Then went back to the Maine Celtic Celebration for more good music and fireworks over Belfast Harbor. 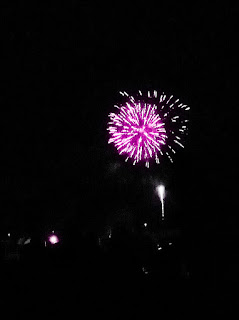 Believe it or not, we went back to Maine Maritime Products for a clam roll and a lobster roll, before heading out toward Bremen and the Audubon camp!

We briefly stopped at Lincolnville Beach 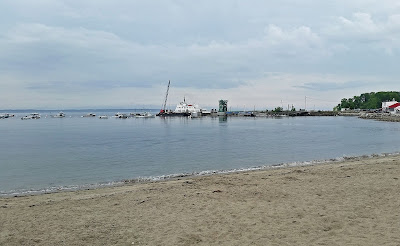 then took a detour out toward the Owl's Head Lighthouse 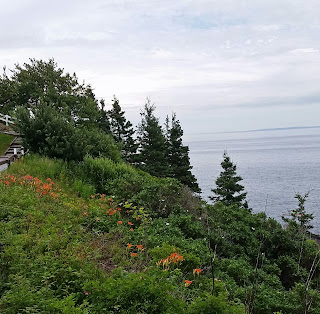 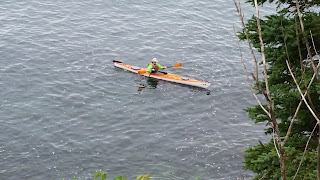 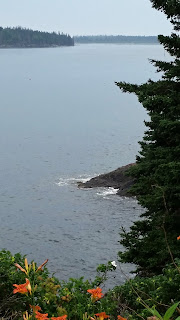 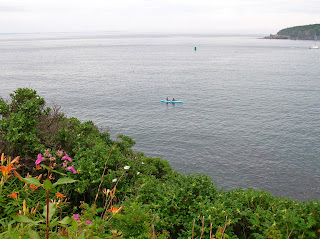 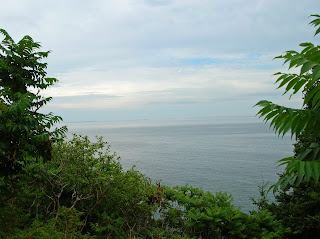 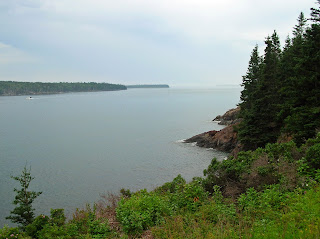 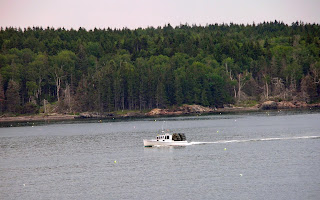 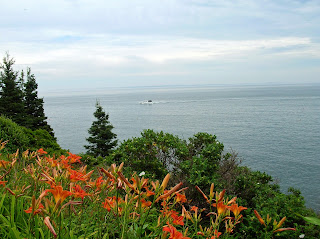 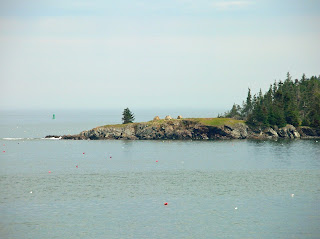 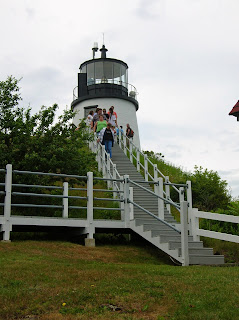 before finally arriving at the landing for Hog Island and the Audubon Camp. (See the boathouse on the island -- that's where Sue would be staying during "camp.") 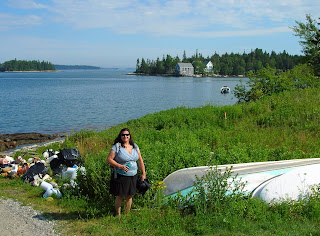 Henry and I decided to return to Belfast via a different -- and unfamiliar to me -- route, and were rewarded with pretty scenery along the way. These pictures show the Camden Hills in the background. 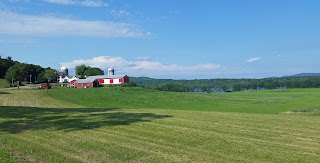 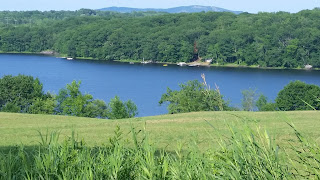 Henry and I took this as a day of R&R.

Posted by Marcille Wallis at 11:23 AM